I want to give you an update on our efforts to recover assets from which we will be able to refund victims of Rex Venture Group LLC.

Our preliminary analysis has identified more than 800,000 affiliate User IDs who put more money into Rex Venture than they took out.  We estimate that losses will total between $500 million and $600 million. We have already recovered more than $300 million and continue to pursue millions more held in financial institutions.  To fill the gap between what we have recovered and what victims lost, we will pursue recovery from those who took out of Rex Venture more than they put in.  There are more than 100,000 User IDs in this category representing hundreds of millions of dollars.

This week we will issue subpoenas to approximately 1,200 affiliates who profited most from ZeekRewards.  The subpoenas ask for financial information, including dealings with Rex Venture.  Depositions and litigation will follow if necessary.  With each subpoena will be a letter offering to negotiate voluntary surrender of profits (victims’ money, really) instead of going to Court.  Additional subpoenas and demands for return of profits will be served on thousands more in the weeks to come.  I can’t tell you we will recover enough to make all victims 100% whole, but if we don’t it won’t be for lack of trying.

As soon as we are able we will submit to the Court for approval an Official Claim Form. Once approved the Form will be posted on this website.  When that process has run we will ask the Court for permission to make a preliminary, partial distribution to qualified claimants from recovered funds.  A final distribution will have to wait until we have finished collecting all recoverable assets.  This will unfortunately take quite a while, and I appreciate your support and patience.

Finally, I have received emails from many of you asking if you need to, or should, hire an attorney or join a group that has hired an attorney to assist in your recovery of claims.  I cannot and do not advise you one way or another about hiring an attorney.  I can tell you that my direction from the Court, and my duty to you, is to seize all recoverable assets and distribute them to victims as fully and fairly as possible.  That, I will do. 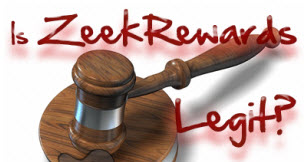 I was recently introduced to Zeek Rewards and after hearing what they do, their pay plan and what they are offering it brings back memories and reminds me of the program I was involving years ago with this company out of Florida called ASD or Ad Cash Daily.

Zeek Rewards is a MLM company whose parent company is called Ziegler which is a penny auction site.Members participate and bid on a penny auction sites which offers people great deals. These great deals and the bidding becomes somewhat addicting where people can get addicted to the bidding process similar to now one may become addicted to gambling.

The problem with Zeek Rewards is right now is that some of their distributors are making some really wild mega money claims with no recruiting or selling. They are claiming that all you need to do is post advertisements around the Internet, on a billboards or just talking to a friend. Doing this you will earn or get credits for their auction site and/or earn money.
Because of some of these claims and the potential legality of the Zeek Rewards compensation plan
Zeek Rewards a Ponzi Scheme or Scam?

Zeek Rewards must act quickly to make the system right but they have already under the eye of suspicion. Right now things are looking very similar to a Ponzi scheme that was the exact reason why the Attorney General shutdown ASD back in 2008. These types of claims where people can get in and do nothing and have monies transferred is basically a big red flag if one wants to call attention by the legal system and be investigated as a possible Ponzi scheme.

Regardless of whether Zeek Reward it is or is not a Ponzi scheme, many times the government can still shut you down even if there’s a slight resemblance of any type of Ponzi scheme. In my mind ASD was not a Ponzi scheme but in the minds of the Attorney General and the US Government they did shut then down and people lost a lot of money. So just a word of caution to watch out and pay close attention to this

Penny Auctions, Onlien advertising? I am constantly amazed at the
number of smart people who get involved inVbusiness models that simply
don’t make sense, or have the possibility of earning long term residual
income.

You end up wasting a lot of time, money and credibility.

excerpt:
Rex Venture Group, which operates the online penny auction site Zeekler.com and affiliates program Zeek Rewards, has closed its headquarters for the remainder of the week for undisclosed reasons.

The company, known to most as Zeek, posted three signs on the windows of its headquarters at 803 West Center St. in Lexington by about 4 p.m. on Thursday that stated the office will be closed, telling visitors to “check the website for more information.” As of 6:22 p.m., there was no further information available on Zeekler.com or zeekrewards.com. The company also announced it is canceling its upcoming “Red Carpet” event, scheduled for Wednesday. The announcement, made on zeekrewardsnews.com, also advised readers to continue to monitor its websites for more information to be forthcoming.

Washington, D.C., Aug. 17, 2012 – The Securities and Exchange Commission today announced fraud charges and an emergency asset freeze to halt a $600 million Ponzi scheme on the verge of collapse. The emergency action assures that victims can recoup more of their money and potentially avoid devastating losses.

The SEC alleges that online marketer Paul Burks of Lexington, N.C. and his company Rex Venture Group have raised money from more than one million Internet customers nationwide and overseas through the website ZeekRewards.com, which they began in January 2011.